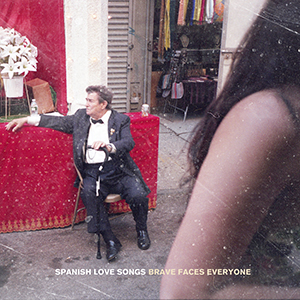 From the opening verse of “Routine Pain” (“on any given day I’m a 6 of 10”) to the closing singsong chorus of the titular song “Brave Faces, Everyone”, the new album from Spanish Love Songs is chock-full of amazing songs.

The album is also the answer to the previously-unasked question, “What if The Menzingers but with, like, really depressing lyrics”, so I should probably slap a content warning on any recommendation: the album contains lyrics about depression, suicide, drug use, unemployment, homelessness, and general existential despair. But also killer fucking guitars, so it balances out? Just don’t leave it on repeat for too long.

Literally every song on the album is great, but “Losers” is possibly my favorite. The closing verse is just perfect:

Haven’t we faced enough
To know this is how it goes?
We’re mediocre. We’re losers.
Forever.

but the chorus also gives you a feeling for what I’m saying with that content warning above:

Check out the video for “Losers”: