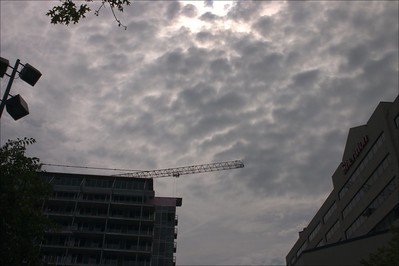 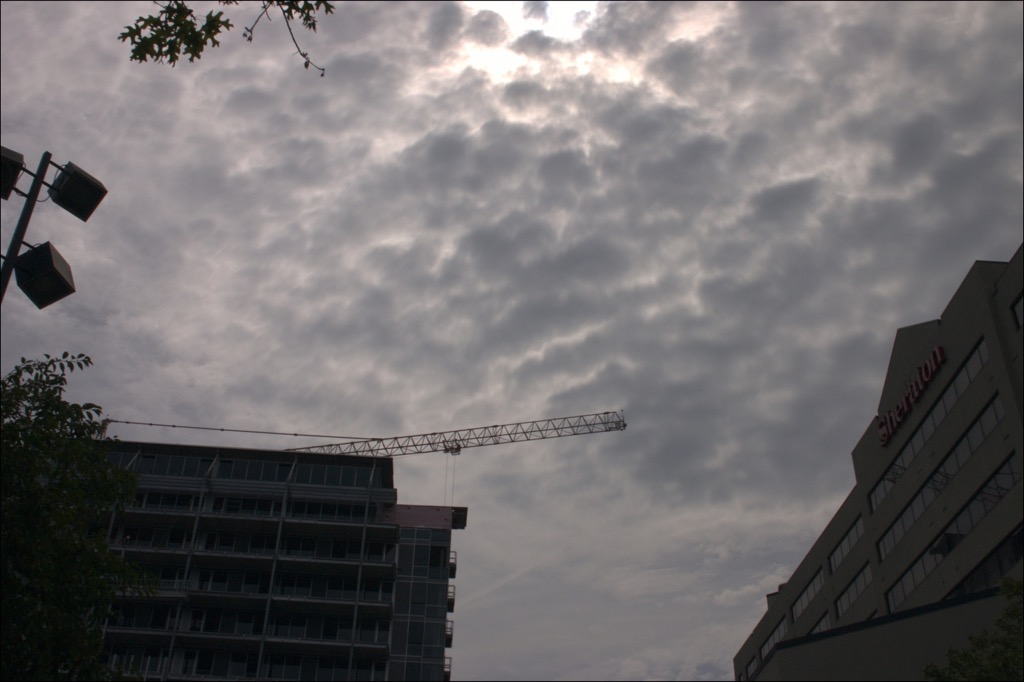 We’ve just returned from a week of vacation. Technically, we returned yesterday, but I’ve spent most of the day unpacking and catching up on this and that and the other and I’m counting today as part of the vacation anyway and so there.

We headed out last Saturday, drove about half-way to Chicago, and spent the night (after much travail) in a too-expensive, too-noisy Comfort Inn in Sandusky, OH. The travail was largely due to our driving too late into the evening – it was after 10pm when we started looking for a room – and the fact that we were sharing the road with a bunch of college-bound kids and their parents, and they all seemed to stop before we did. Anyway, the Comfort Inn was the fourth or fifth place we tried, and we weren’t in the mood to be too picky at that point.

Back up in the morning for an easy drive the rest of the way in, although the road construction in the Chicago area was insane. We rolled in to TheWife’s parents’ place around 5pm or so, leaving just enough time to catch up with people and tell road stories before unloading the van and having a bite of supper.

Monday was TheChild’s third birthday. TheWife and one of her sisters spent a goodly part of the day baking a cake; I spent a goodly part of the day leaching wireless access from neighbors and catching up on email. The rest of the family started rolling in as the afternoon progressed, and by the time we sat down to eat, we had ten-odd people plus the all-too-happy birthday girl. We had presents, dinner, more presents, cake, and, possibly, more presents, before it was all over.

Tuesday we got up late and eventually stumbled out the door. First order of business was to head to another Chicago suburb and spend some time hanging out with J. and S., friends of ours from our undergrad years at Iowa. When we first arrived, S. was out having a lunch meeting, so we had a bite of lunch with J. and the new baby E. Between catching up with J’s doctor adventures and admiring the way S. has decked out the house, we had a fantastic time. (Private to S.: TheWife and I want to know if you do architect/design stuff by wire – we’re planning on finishing our basement and would be overjoyed if it ends up looking half as put together as your entire house does…)

Later in the afternoon we said our goodbyes, promising that it wouldn’t be mumble years before our next reunion, and then we pushed on towards Iowa City. We rolled into town right around 7pm, and quickly checked into our hotel and hit one of our old hangouts for dinner. After eating, we roamed around the downtown area for a bit, and then eventually ended up back in the hotel, as TheChild was getting a bit cranky. Everybody was pretty worn out from the time in the car, and we all ended up asleep a bit earlier than normal. 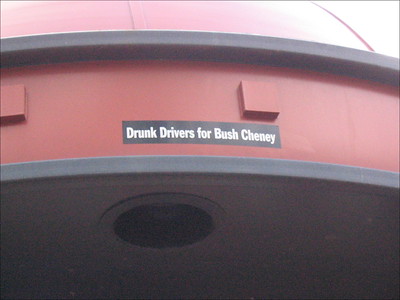 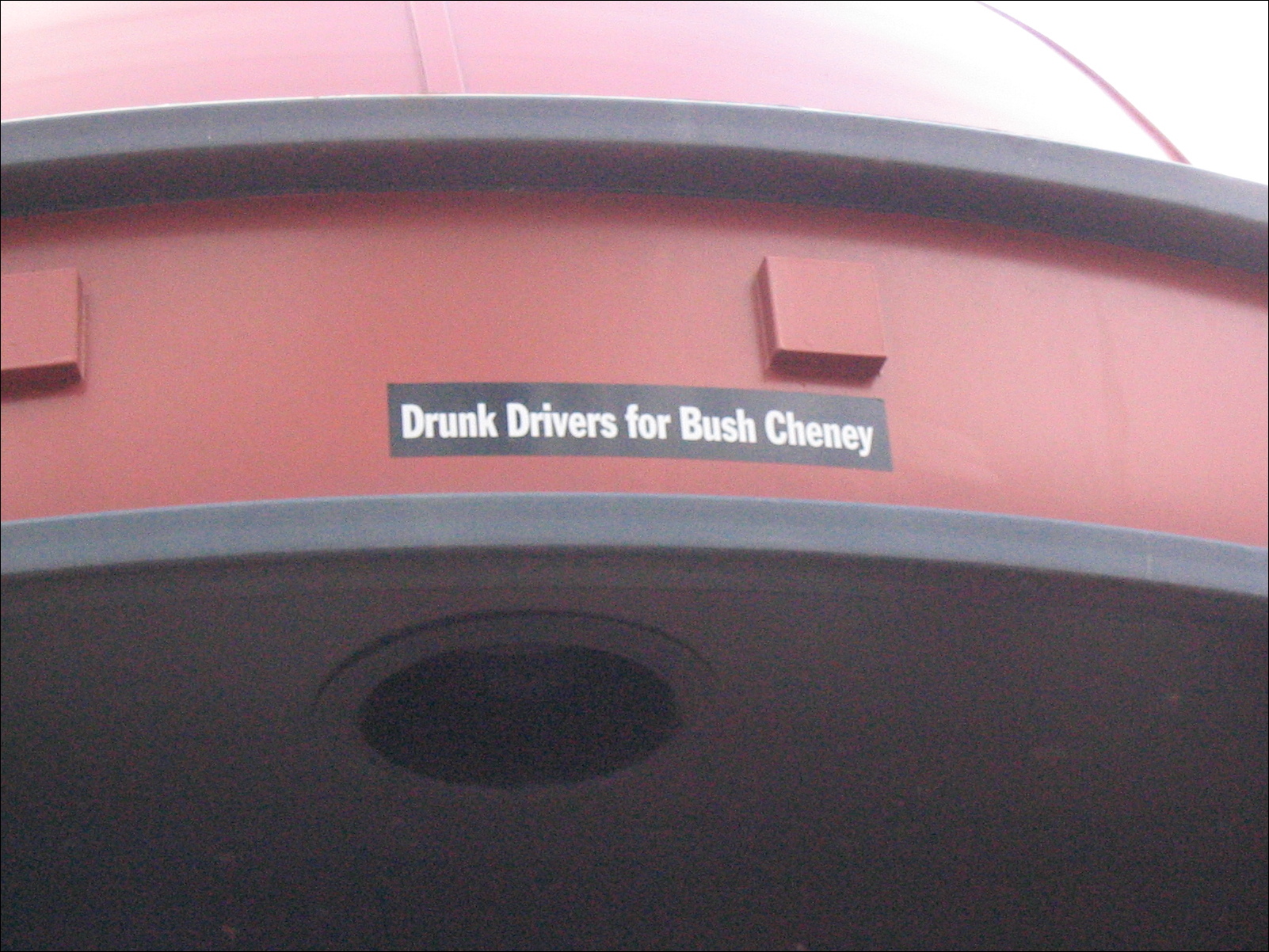 More roaming around in the morning, then TheWife and TheChild went to meet up with some of TheWife’s old registrars’ office friends for lunch. I roamed around by myself, soaked up the scenery, and caught up on some email (what else?) The whole day was really a festival of wandering around the once-familiar campus and downtown area, looking for things that had changed and things that hadn’t. We also took the chance to replenish the “Iowa” section of our wardrobes, of course. Gotta help that local economy. After we checked out of the hotel, TheChild took her afternoon nap on a quilt on the Pentacrest, while TheWife and I hung out and read. Once she woke up, we wandered a bit more and then grabbed some dinner. After that it was back in the car to check out a few more sites – the grungy old apartment house where I lived the last two years is still standing and appears to be occupied! – and then we headed back towards Chicago, finally arriving (damn construction!) around midnight. 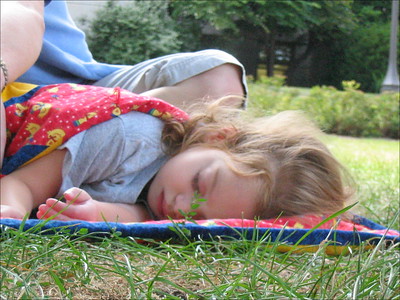 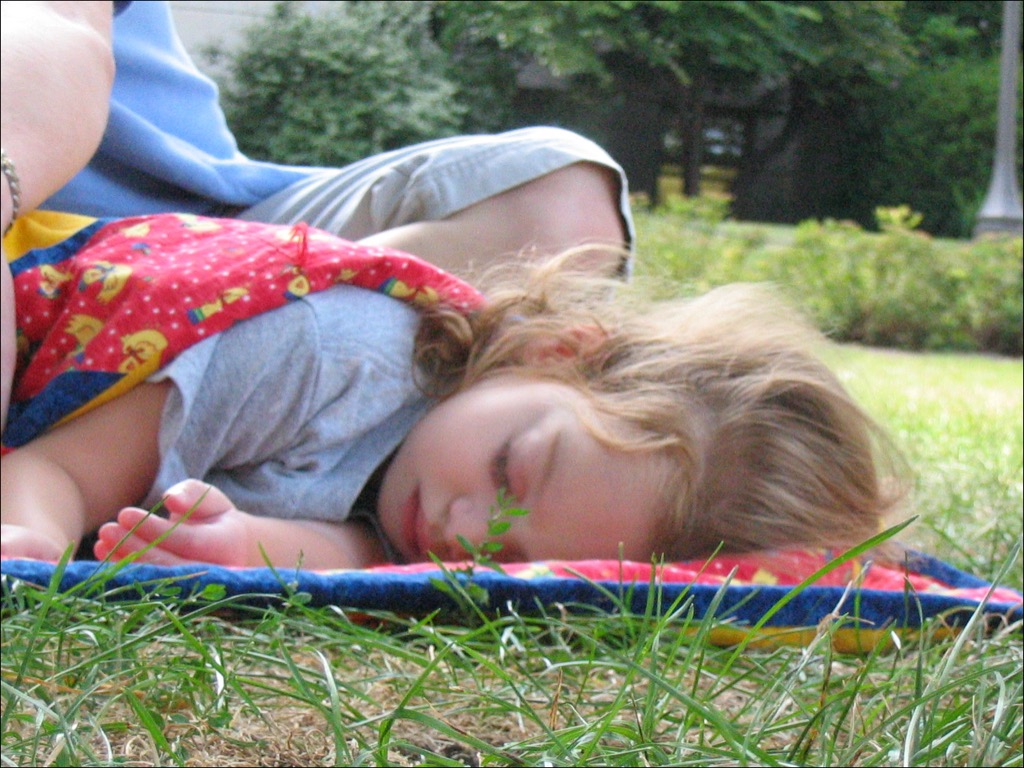 Thursday was mostly a hang-out and catch-up day. We all enjoyed not being in the car, although TheWife and I did duck out for a bit to run around Crystal Lake. I think TheChild enjoyed the grandparent time.

Friday morning we loaded the van back up and set out for home. We made a quick stop at TheWife’s home office in Northfield, had a quick bite to eat, then crawled down through the center of the city and headed eastwards. We stopped for the night early, around 7pm, just inside the western border of Ohio (exit 13, to be specific). The clerk at the hotel counter recommended a place down the road called the Maywood, so we figured we’d give it a shot – and we were pleased that we did. The food was first-rate, and the beer selection was astounding given the size of the town were in. The co-owner was manning the grill (the other co-owner, his wife, was waiting tables), and he took a break at the table next to us. Since he and his friend were chatting about good beers, and since I happened to have some good beers in the van, and because the meal had been so unexpectedly good, I ran out and grabbed a pair of Dogfish Heads – one Aprihop, one Raison D’Etre – and gave them to him, which of course sparked the inevitable beer conversation. As we were leaving, he insisted we take some desserts to go in trade for the beers; later on, back in the hotel, we found they were as excellent as the food. If you’re ever in Montpelier, Ohio, look up the Maywood, on Platt St. south of the railroad tracks. Worth the detour off the Turnpike.

Saturday morning, bright and (relatively) early, we got back in the van for one last push. Around eight hours later, about 6pm, we rolled back into our garage. (And then we quickly offloaded the van and rolled back out in search of dinner – but the vacation, for all intents and purposes, was over.)

All in all, we had a good vacation. Caught up with family, some old friends, and an old stomping ground. Had some needed time away from work. Found a diamond-in-the-rough restaurant in when we least expected it. Even managed to catch up on some reading!

Update: Just found some scrawled notes – apparently the best band names spotted in kiosk ads were “Jesus Don’t Like Killin” (playing a Mid-East Peace benefit, no less) and “Moonboot Death Stomp”. Neither appears to have a web presence.