back, for a bit
sigh And so the urge to post something, anything, wins out over the desire to write some software to make the posting easier. Not as if it really matters to the people reading this, after all -- I could be typing this page into Emacs via Morse code for all that it matters to you, right? 8^)=

So, I'll be back for a little bit -- today's postings, maybe one or two more this week, but then I leave Saturday for Tucson, where I'll be helping a friend load up a truck that we'll then drive to New Haven. So the real return will be in the last week of July, if you'd like to hold off coming back until I get my writing muscles worked back into shape.

new toy
As you might have guessed from the photo that used to be here, and the new little detail over there on the left, Lor and I bought a new camera recently. It's a Sony Mavica MVC-FD92, and we're quite happy with it. Expect to see inline pictures in the new and improved Genehack, like this: 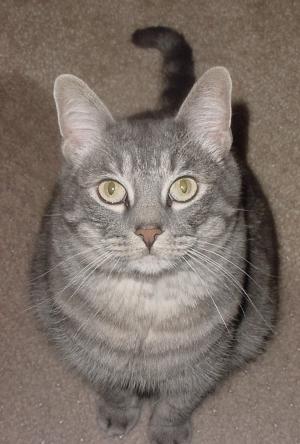 It's also got several built in "effects", like "negative": 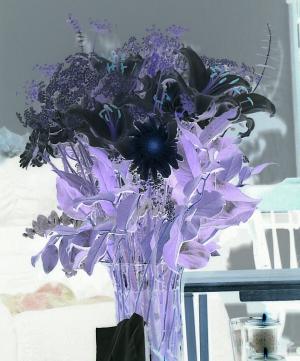 I think those are pretty cool, so you should expect some of that as well.

LaCrAp
For a while now, I've been playing around with the idea of learning some Tex, and from what I hear, LaTeX is the way to go. I don't have any real need for it; it's just that I think markup languages are in general kind of cool, and it certainly couldn't hurt to know it, as it seems like one of those things that could be very useful in the right set of circumstances.

I wasn't however, willing to plunk down the forty or fifty bucks necessary to get a decent book on LaTeX, and the online guides I've found have either been mostly wrong, completely trivial, or both. That was the situation up until last week, when I noticed that a cow-orker had a copy of Leslie Lamport's LaTeX: User's Guide & Reference Manual, which I promptly borrowed. Tonight, on the Metro home, I finally got around to reading the first couple of chapters.

After a fairly lengthy discussion of the difference between "logical" markup and "WYSIWYG" style layout, Lamport finally starts explaining some of the basics of using a markup language. As one of the examples, he talks about using the emphasis tag, '\em' and discusses how you need to use a special control sequence to generate an extra trailing space, depending on whether or not non-emphasized text appears on the same line following the emphasized text!

Why? Because the emphasized text will be rendered in italics, and so you might get the last slanted character overlapping the first non-slanted. This assumes, of course, that '\em' text will always be displayed in italics, and means that if you decide for some reason to render it in boldface, you're going to have extra spaces all over the place, but that's okay, because these "logical" layout languages are so much better than WYSIWYG. Furrfu.

I think I'm over my desire to learn LaTeX.

elves and dwarves and hobbits, oh my!
With my reading for the trip home disposed of, I started to people-watch, basically out of a lack of anything else to do. I noticed a fellow passenger reading Cryptonomicon, and I started thinking about the dinner scene, where Randy maps the Tolkein-verse onto academentia. That reasoning actually applies pretty well to my current workplace as well -- we've got a few Elves, with the rest of the workers being split fairly evenly across Half-Elves, Men, and Hobbits -- with the exception of the systems group, who are mostly Dwarves.

Then I got to thinking about where I fit into this classification -- I'm clearly not an Elf; I don't have that otherworldly devotion to some esoteric topic. I hope I have enough clue that I'm not a Hobbit; the fact that cow-orkers seem to keep coming to me with various questions and problems sort of supports that idea. That also means I'm not a Dwarf, because if I was, I would be surly enough that they would be more cautious about approaching me. Am I merely a Man? That would be kind of boring.

Anyway, if you've got a spare minute, drop me a line and tell me where I fit in, or where you fit in, or that I've obviously gone totally daft in the last 7 weeks.

it'll get better soon
I'll try to actually have a link or two in the next update, lest Genehack turn into some sort of ego-stoking journal site, or something. 8^)=