Another quiet week at GeneHack. Once again, Lor was out of town, and I spent far too much time doing non-bloggy stuff, like going out drinking with work people, and getting caught up on some reading (I finished The Mythical Man-Month and The Cathedral and the Bazaar, as well as finally finishing off Practical C Programming at work.) I also got in a bit of conceptual work on the database schema for my roll-yer-own CMS, after I found some intractable issues with the previous design. Ghu willing, I’ll be able to get some work done on that this weekend.

After last Sunday’s Sex and the City, I asked Jeeves “What’s in a Cosmopolitan?”. Doesn’t sound all that good to me, but I’m a beer and Scotch man (seperately, by preference).

Gnome Office review, over at LinuxPlanet. Wish I’d remembered this when I had the conversation with the guy in the liquor store about the feasibility of day-to-day Linux use.

That conversation got started because I was wearing my “Total World Domination” shirt, on Wednesday nonetheless. (Completely unintentional; hadn’t even been paying attention to the whole trial business…). The pic below is me, with the shirt, at the Ratbastard house party, courtesy of digital camera diva Jessamyn. 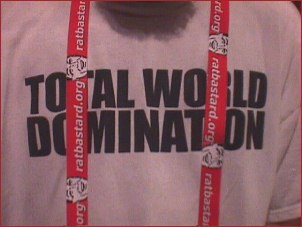 One of the other things I accomplished was (finally!) getting Squid to play nice with Junkbuster. This advice was key. If you’re on a nx system and you’re not running these, you really should look into it. A much nicer browsing experience awaits you. Now I’ve got to see if The Powers at work will let me run them there…

Texas sodomy law ruled unconstitutional: Yay! This was a bit odd, however:

“The simple fact is, the same behavior is criminal for some but not for others, based solely on the sex of the individuals who engage in the behavior,” Justice John S. Anderson wrote.

Not that it’s an uncommon name, or anything.

At the rate things have been going, I’m going to have to either (a) bind a key in Gnus to auto-mail this URL to people, or (b) just have procmail auto-mail it to any address that sends me HTML-formatted mail. Of course, the page gets URL formatting slightly wrong (people should use <URL:https://genehack.org>, dammit, it’s not any harder to type, and it would make regex parsing for hyperlinking so much easier. Most maddingly, he doesn’t address the god awful habit people have of inserting their response before quoted text – yet another Microsoft-generated innovation. Bah.
Stolen from Cam.

This is looking like it’s going to be a long night – as I said, Lor’s out of town, at a meeting in New York. I don’t have the hotel phone number, just her cell phone. She was supposed to call tonight, and she hasn’t, so I finally tried to call her, and all I get is voicemail. I’m sure she’s fine, but this is the kind of thing that smacks my Type A personality bump real hard. Sigh – getting to sleep tonight is going to be fun.
10 minutes later: She called. 8^)=